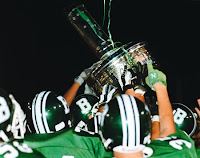 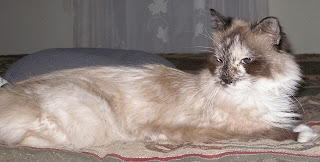 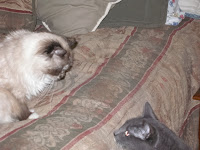 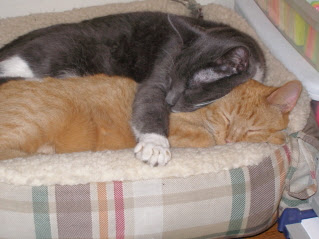 During: Looking from the living room, through the dining room to the kitchen in the rear. Note the sheetrock covered door on the left. I moved the door just a couple of feet south to the corner. 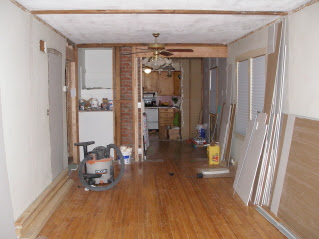 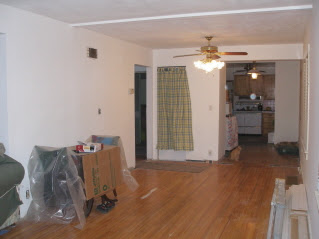 During: Bathroom. Note looking through the wall studs in the upper middle of the photo, you can see the hole for the mirror you see in the next picture. 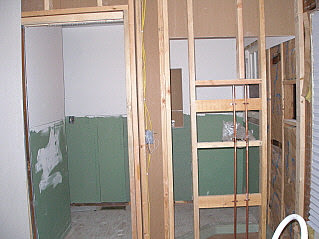 Today: YEAH! No more brushing my teeth at the kitchen sink! 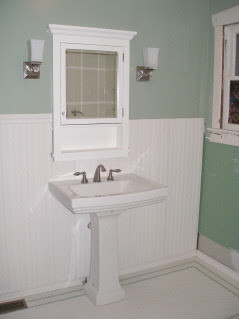 Yeah! The appraiser was here last night. I’m fairly certain I’ve come through this process unscathed and financially whole, but I won’t be positive until I hear from mortgage savant Ann Wilkinson of Millcreek Home Loans! J Either way, I’m done with the exhausting 16-18 hour days and am looking forward to relaxed and ROOM-focused renovation projects. It was tough having to do most everything all at once, especially with no “Gilligans” to help me! Well, not completely true, I did have a few Gilligans that helped with the painting, and, of course, Linda wanted to learn to mud…I think she may have regretted that once her hands were caked with it! Thank you very much to all that pitched in to help.

I’ve posted a few before and after pictures so you can see what I’ve accomplished in the past two weeks…while working full time, including a 4-day business trip and a couple of vacation days… I was often amazed at just how much I know and was able to do…thank goodness for HGTV, eh?